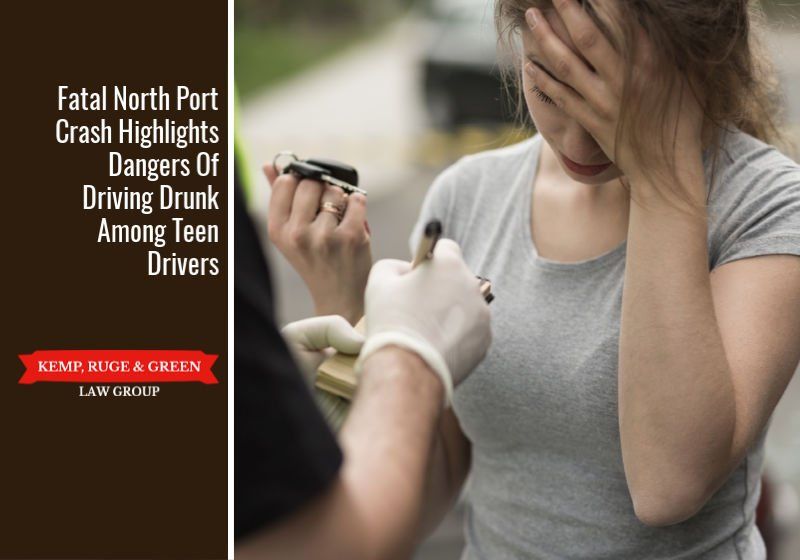 Key Points of This Article:

5,000 Accidents Cause At Least 300 Deaths Annually

We may be making headway with the help of new automobile safety devices and stricter Florida DUI laws. From 2017 to 2018, we saw a 16% decrease in DUI fatalities across our state and we’re hoping to see the same kind of progress when new statistics are released for 2019 and 2020.

Today, Floridians including Tampa Bay residents who drink and drive face the possibility of more jail time, heavier fines and a greater likelihood of losing their driver’s licenses than ever before. An intoxicated driver who causes a crash and injures or kills people may face an array of charges, including:

A recent incident in North Port, Florida, shows the impact of an underage driver who hits the road drunk with passengers in the car. In April 2019, a 19-year-old driver took the wheel around 2:40 a.m. after partying and drinking alcohol supplied to her by a 22-year-old friend.

Twelve of her friends crowded into and on top of her SUV, hanging out of the windows and sitting on the roof of the vehicle. The driver lost control of the SUV on a curve and it rolled, crashed and threw the occupants onto the roadway. A 17-year-old passenger was killed instantly and others suffered injuries that required hospitalization.

Florida police charged the 19-year-old driver with three counts of DUI with personal injury and one count of DUI manslaughter. They also arrested the 22-year-old man on eight counts of supplying alcohol to minors – the legal drinking age in the state of Florida is 21.

Motorists Don’t Have To Choose to Drive Drunk

A North Port Police spokesperson described the accident as “completely avoidable, completely sad.” The police tweeted that the accident is one more in a series of recent Florida crashes with local teenagers drinking and driving – “One life lost and a few ruined.”

Driving under the influence of alcohol or otherwise impaired is the fault of the person who chooses to drink and get behind the wheel of a vehicle. Alcohol-related crashes involving injuries or death are complex and it’s not easy to sort through exactly what happened and place the blame where it belongs.

What if you’re walking along the street and a drunk driver hits you while you’re using a crosswalk?

What if a drunk driver crashes into your parked car on the street?

What if someone else crashes your car while you’re drunk in the passenger seat?

What if they flee the scene?

Under these circumstances, local police try and hold the right person accountable but, as a person who suffers injury and other losses, you may not be pleased with the outcome. For example, a first-time DUI in Florida carries a maximum sentence of six months in jail, but there is no mandatory minimum. A judge may take mercy on the offender and give them home detention instead. It depends on the situation.

Place the Blame Where It Belongs

Sometimes, the best thing you can do is file a personal injury lawsuit against a DUI driver and try to get some justice. If you have been involved in an alcohol-related accident and suffer physically injury, property damage, emotional damage, lost wages or other harm, contact an experienced Tampa Bay car accident attorney who can help you demand the compensation you deserve.

Regardless of the reason for your injury, if someone else caused it, the only way you can recover from your medical bills and other losses is through a personal injury claim. The attorneys at Kemp, Ruge & Green Law Group handle many areas of personal injury law including car accidents. We believe you should only have to work on getting well, while we worry about using the justice system to protect your rights. We give our clients with the best possible results-driven service. You pay us only if we win in injury cases. Call 877-941-4878 today for a free consultation.